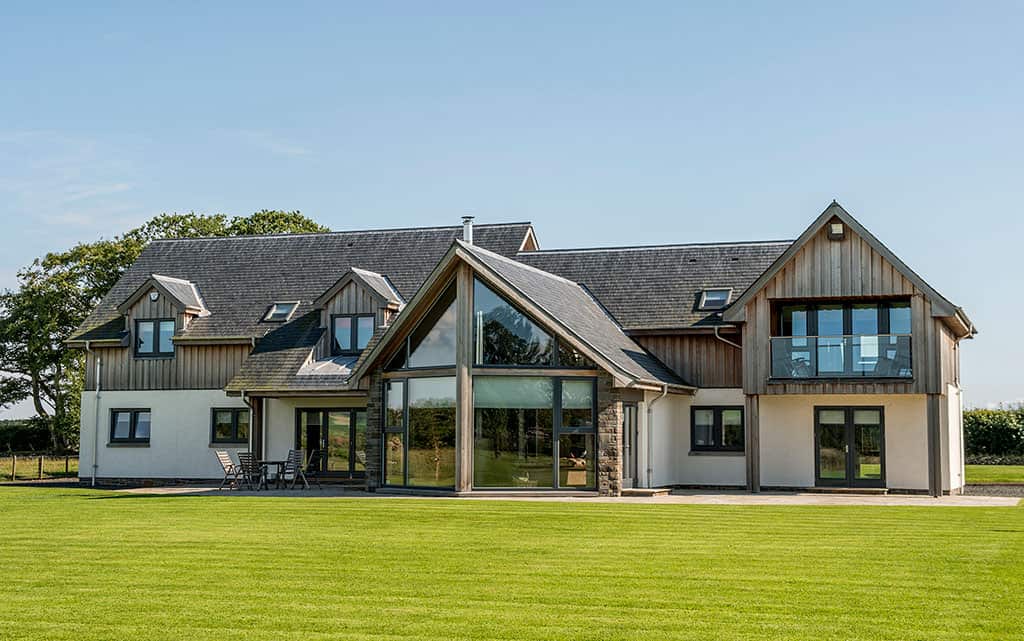 There are three main build routes for building your timber frame home. As a self-builder, you should thoroughly consider each one, before setting out on your project. Find out which one suits you best right here!

Three Build Routes for Self-Build
The three main routes to self-build are as follows:

Each build route has its own advantages and disadvantages. Like every decision within a bespoke self-build project, the right choice depends on your specific project requirements and your individual preferences.

Main Contractor Route
The big attraction of the main contractor route is the potential to limit the likelihood of error in your project.

A successful main contractor will use their skills and expertise to coordinate the various phases of your project from start to finish, drawing on their knowledge and experience to make critical decisions on your behalf.

The success of this method relies heavily on your choice of main contractor, so extra care is needed when making your appointment. This build route is also referred to as a ‘key in the door’ service, and is often supplied by the timber frame manufacturing company.

Passing the responsibility onto one major party comes with a cost implication which needs to be factored into your total build budget. Typically, the main contractor or ‘key in the door’ route will cost around £1,500m², depending on several factors. Two significant considerations with a major bearing on contractor costs are the complexity of your design, and the location. A complex home build in greater London, for example, could cost in excess of £1,700m², whereas a relatively modest home in Northumberland could have main contracting fees of around £1,300m².

Part Self-Managed Route
The part self-managed route is often chosen as a compromise between the more expensive main contracting route and the perceived ‘high risk’ self-managed route. It’s a popular option for first time builders who have limited time to commit to their project, yet want to be involved as much as they can. In most cases, a specialist project manager is employed to work alongside the self-builder, to coordinate the various build phases, and help with the decision-making process throughout the build.

Like a main contractor, a successful project manager draws on their knowledge and experience to limit ‘risk’ within a self-build project, which in turn gives the self-builders confidence to make better decisions. This privilege comes at a cost, which means that part self-managed projects are popular with self-builders with greater budget flexibility. Money spent on a great project manager is money well spent. Needless to say, money spent on an ineffective project manager can be money down the drain. Appointing the right one is critical.

The cost per square metre for a part self-managed project is generally around £1,200 to £1,300m². Again, this parameter depends on several factors, including complexity, location, and the project management services provided. Such services vary in supply, as do the associated costs. Many project manager fees include a fixed cost relative to the size of your project, whereas others may charge a percentage of your total build cost.

Self-Managed Route
With a self-managed project, the self-builder act as the project coordinator, appointing all sub-contractors and managing the operation of works onsite.  The major benefit of a self-managed project is the ability to limit costs and pack more ‘home’ into your budget. Many self-builders following this route carry out a proportion of the works themselves, which further reduces build costs, leading to a greater return on investment.

The downside of this route is the potential for error brought about by lack of knowledge or expertise, so the key to a successful self-managed project is preparation. Self-builders adopting this route must acquire a solid understanding of the self-build process before starting their project. The attraction of reduced build costs makes this route the most popular. Contrary to popular belief, a very high majority of self-managed projects are a complete success.

A self-managed project can cost under £1,100m², if managed successfully. With this route, the self-builder controls the tendering process entirely, and is thus the sole benefactor of trades competing to provide extra value to their services. Moreover, the more work carried out by the self-builder, the more savings can be made. One spin-off is the very satisfying achievement of building your own home in the true spirit of self-build.

Costs Calculator
Estimating costs of a new build timber frame home is best done on a cost per square metre basis. For a realistic indication of your total required budget, you need to consider the different build routes.

For a simple way to compare the different build route costs, use our cost calculator. Simply add the size of your proposed home in the box, and the calculator will do the rest.