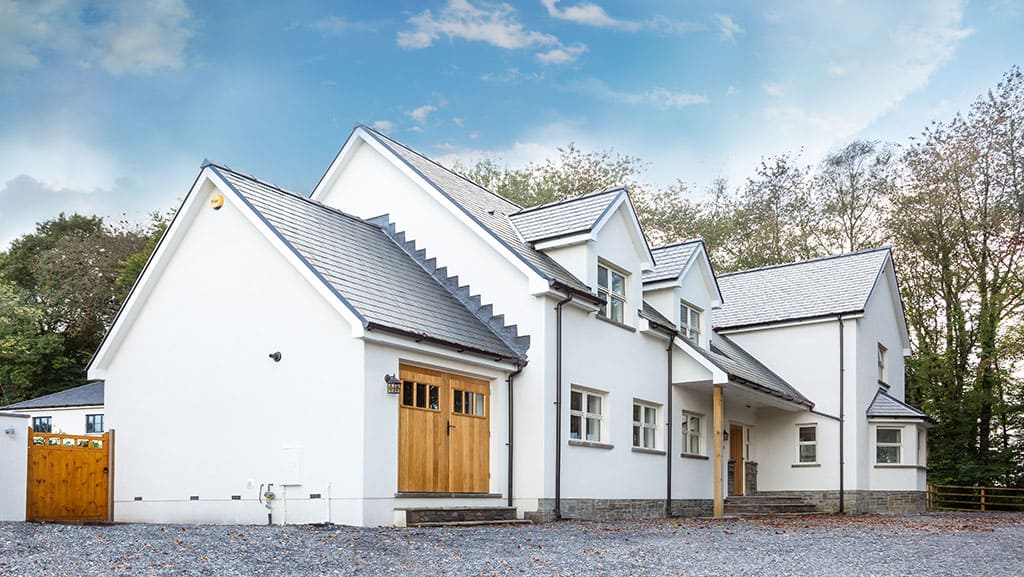 Paul and Rhian Bates planned to build a spacious home to retire to after Paul’s 30-year career in the fire service. Coming from such an active, high-pressure job, he certainly wasn’t going to be twiddling his thumbs, so although the couple were new to self-building, they decided to manage the timber frame build project themselves.

Paul says timber frame was the natural choice. ‘We wanted speed of construction – weather is a big factor in this part of Wales. And we knew timber frame meant we could get what we wanted in terms of space, insulation and high-quality specifications at a good cost.’

The Bates started looking for a plot before Paul’s retirement, with dreams of a large space in the Welsh countryside, with plenty of garden and room for Paul’s workshop. They eventually found the perfect plot in rural Carmarthenshire, occupied by a semi-derelict 1950s bungalow that was ripe for demolition.

Paul met Fleming Homes’ Sales Manager, Jason at The National Self Build & Renovation Centre in Swindon, and was impressed by the company’s service ethos.

‘I could tell Fleming Homes would hold my hand during the process. They weren’t the least expensive company, but they took us through planning and regulations, which can be tricky in rural Wales. They also did the building calculations, and as the build progressed, their service was fantastic.”

Fleming Homes’ full self-build service was particularly valuable to Paul, as he wasn’t an experienced DIY-er. “I was prepared to be very hands on – I did a lot of standing in trenches in mud, up to my neck in cement and breeze blocks! But I was new to the self-build process. Luckily, I had an expert builder. Dylan has 25 years’ experience in the old-school Welsh ways, prioritising insulation and airtightness.”

The dream building plot in rural Wales turned out to be far from straightforward. Says Paul: “It was a difficult site to buy, as the owner had died, and the beneficiaries were in dispute. Then we discovered a bat maternity roost in the loft. Planning permission was conditional on solving this. We employed a consultant recommended by Natural Resources Wales, but it was a difficult relationship, with costly eco-surveys, and significant delay costs. We felt there had to be a more practical balance. In the end, we saved time and money by building a direct relationship with the local council, who were very helpful”.

The Bates meanwhile finalised their design, together with the team at Fleming Homes. “Rhian had more input on the design and aesthetic side. We gave our ideas to Fleming Homes – just rough sketches – then they emailed us back designs. Over six months, we scribbled on the sketches and refined the designs. There was never a complaint about how long it took – I’m not sure we’d have got that service from every timber frame company!”

The house is basically two houses in one, says Paul. “It has a semi-traditional frontage in Welsh local brown and blue-grey stone, with a crisp render finish and a Welsh slate roof, in keeping with the local aesthetic. The back is more contemporary, with lots of glass and grey windows. We have three bedrooms in a six-bed size – we wanted it to feel really spacious.”

After the meticulous design process, getting through planning was straightforward. “We were expecting problems”, Paul explained, “as this is a very rural area, and the old and new properties were chalk and cheese. But thanks to Fleming Homes’ input, it went straight through in eight weeks.”

With bat compliance sorted, demolition got underway. The site was large and heavily sloping, with surface rock and thick Welsh clay. After some minor issues with groundworks and excavation, getting the house up was relatively quick –  the timber frame kit went up in only two weeks.

“Getting the kit up was the best bit! Once we got the floors down, we were really up against it in time”, says Paul “If it starts raining, it turns the place to mud, and you can’t build. And it rains a lot in Wales! You can lose weeks at a time. We managed it with hours to spare.”

The 2-in-1 house design called for close teamwork between Fleming Homes and the Bates’ builder. “The junctions where the building fits together were tricky because of the mix of materials – Welsh slate, timber frame, weather board, render, insulation,” explains Paul. “My builder, Dylan, had no experience of this, but Richard Simmonds, Fleming Homes’ Technical Director was very helpful. On quite a few occasions, Richard sent through extra construction drawings, and talked me and Dylan through on the phone. Fleming Homes don’t just make timber frames, put it down and ‘ta ta’. They’re not that kind of company.”

Summing up – “as near perfect as we imagined”

The verdict on the Bates’ new home? “It’s fabulous!” says Paul. “Really special, with a tremendous feeling of space. The rooms are very tall, with a 7m ceiling upstairs. The underfloor heating is an absolute masterpiece – it makes the house really pleasant and comfortable.”

The whole project took two years from start to finish. Paul admits it could have been done quicker, “but it would have cost more, and the quality would have suffered. Fleming Homes gave us a realistic budget and time expectations.”

The result? “We have a home for life now. It will never be for sale. It’s as near perfect as we imagined.”

Advice for other self-builders? 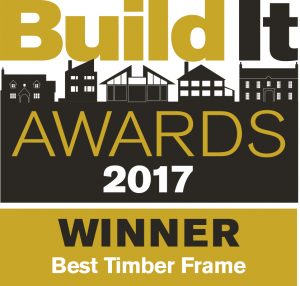 Back to Case Studies

self build residential property to let

Redefining the traditional farmhouse for the 21st Century

A Healthy Home Fit For The Future

Our homes brought to life on video